Some catching up to do I can't believe how long it has been since i last posted. I guess a lot of things have been taking priority over the blog. If my blog is part of my art practice then that means that my practice has been suffering as well. Just to catch people up on what I have been doing I will give a brief overview of what I have been up to since my last post.

From August to September 10, Carol and I had a show at Rush Arts in Chelsea that was called "in Progress" The idea behind the show was to constantly be adding to the show until the final closing. We also did a performances every two weeks for the duration of the show with each performance building on the first and final one that was vastly different from the original.

The wall drawing images were based on the performances while the sculpture in the back room originated from some images I had been using in my drawings. I will go into each of these later and will provide pictures as well.

The photo I posted with this blog is one from a show in Brooklyn and Curated by Coren Denise Cooper. It contained drawings that both Carol and I worked on together with our one year old son Dante. I will be posting more about that show and the idea for those drawings in later posts. Trust me, I have a lot of catching up to do, so you can expect pictures and writings to follow.
Posted by Jonas Olson at 5:11 PM 6 comments:

Our performance work has been dealing with the negotiation of relationship and space and the tensions that accompany sharing close quarters. This particular work has the stronger performer dominating the other by pushing relentlessly and never allowing the smaller performer a chance to recuperate.

I really felt like a jerk while we were doing the performance and I even had a spectator tell me that it should have ended with Carol socking me in the nose. With a comment like that I think the piece must have made an impression and it was confirmed when we had someone come up to us at PS1 a few weeks after the performance and ask we were the ones who did the performance at the Queens Museum and we responded yes. I then added that I my chest was covered with bruises the next day and his response was "good, you deserved it"
Posted by Jonas Olson at 8:56 AM 5 comments:

Bring Back some of the Old Inspiration

The Obelisk is Finished 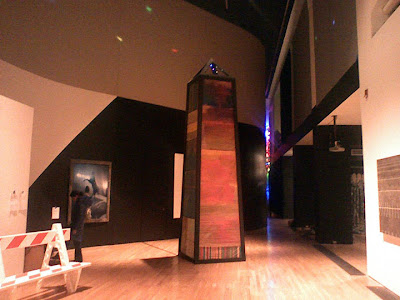 After a lot of hard work the sculpture for the Queens Museum is finished. Carol and I are happy with the results and found out what is is like to build and instal a large work while having to take care of a baby at the same time. Dante was with us during the entire installation and required as much if not more attention that what we were putting into the sculpture. So, it was a good thing that we had a little over a week to instal the work because we needed it.
I was very happy I took so much time in the early stages to really plan out exactly how I was going to design and build the structure. There were many drawings done on post-its, napkins and any paper that was handy when I got an idea of how it should be constructed. At the same time the sketches were coming, foam core models were being built while I had free time at work. These models proved to be some of the best ways for me to realize the basic proportions that the obelisk would take. Once the form was down the materials were decided on. 2x4s were finally chosen as the foundation for the structure. One the materials were chosen, the scale models were built to insure the structure would be sound. I was thinking that once the full scale piece was built, I would have to reinforce it with crossbeams but the design turned out to be more sturdy than expected and we were able to keep the sides free from extra lines.
I will post more about the different elements when I have detail photos. Until then I hope you can make it out to The Queens Museum to see the work.
Posted by Jonas Olson at 10:45 AM No comments: 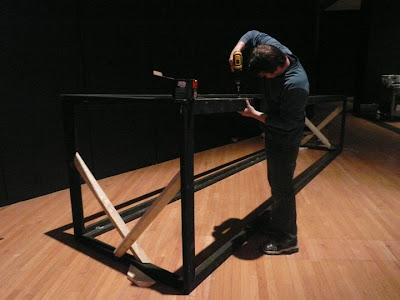 beginning of the instal 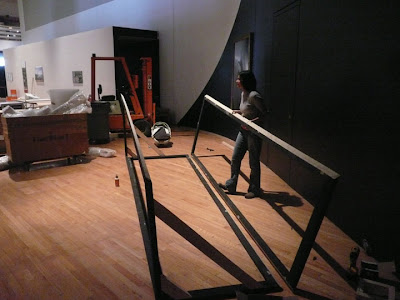 Posted by Jonas Olson at 5:49 PM No comments: 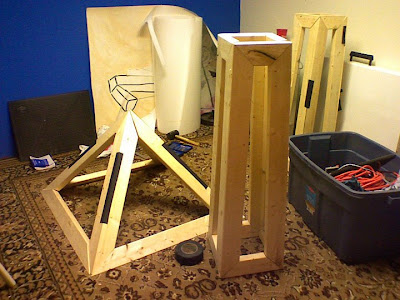 My scale model of the obelisk is done. I had to make a couple of them in order to get all of the pieces to fit together right but I am real happy that I took the time to work out the angles at home instead if during the installation. I was able to fine tune the work and will be better able to handle the problems that may occur while constructing the full size one.
In the picture there is the pyramid in the background that is at full scale and will sit on top of the obelisk. The model obelisk is 3.5 ft tall and will be 14 ft tall in full scale. With the pyramid on top the whole structure will be a little over 16 ft tall. The plan is to leave the construction elements visible with two of the sides covered in drywall from the inside so that the wood elements remain visible on the outside. There will be no cross beams for support but will rely in the two solid walls to remain upright. The base will have drywall all around two feet from the bottom and will be filled with a heavy material to keep it from tipping over.
Posted by Jonas Olson at 5:11 PM 3 comments:

Jonas Olson
Images of my paintings are put here and I discuss them in a very raw form. I want to put my work and ideas of it in a very vulnerable state to encourage dialog between myself and the viewer.